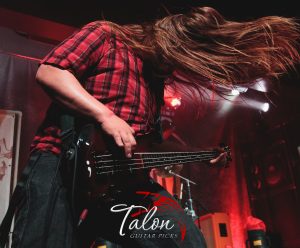 The thundering backbone of the Denver metal band Scarlet Canary comes from bassist Marcos Gonzales. The combination of power and response are utmost in his approach to bass playing, with consistency in string response being fundamental. Talon guitar pick model T3 in the Heavy Series has answered the call of his demands. “The pick aggressively hits the bass strings… and I barely drop picks playing live anymore. The grip makes it easy to switch between standard alternate picking and using my fingers as well.”

With their 2015 release of their album ‘Arise’ the band has been doing just that, rising through the ranks of the regional music scene. Early tours in the Midwest with Stitched Up Heart and City of the Weak generated the momentum that sparked a number of US Headlining tours going as far west as California and as far east Pennsylvania. 2016’s Tour Schedule consisted of 92 shows across 21 states, 46 cities, 47,906 Miles and 65 days’ worth of drive time. This tour history has earned the band performances with Avenged Sevenfold, Stone Sour, Skillet, Gemini Syndrome, Lita Ford, and many more. Their awesome shows have found them on stage at ‘Rock Fest’ 2017. 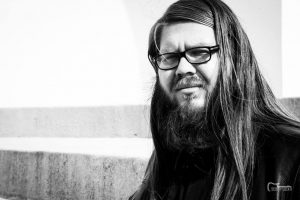 “Arise” reached a peak chart position in the top 50 on Radio Contraband’s ‘Under the Radar’ charts in 2016. You can hear Scarlet Canary’s music played on FM Stations from Idaho to Wisconsin. The Band’s music can also be found on Pandora, Spotify, Apple Music, and all other major online retailers. The group has released (May 2017) the much-awaited album to Arise titled ‘Perspective’ produced by Nick Nodurft of Rusty Sun Audio . “Flockers” (fans) will be out in force as they have also just announced the 2017 tour schedule across the US… so get ready to flock-out!