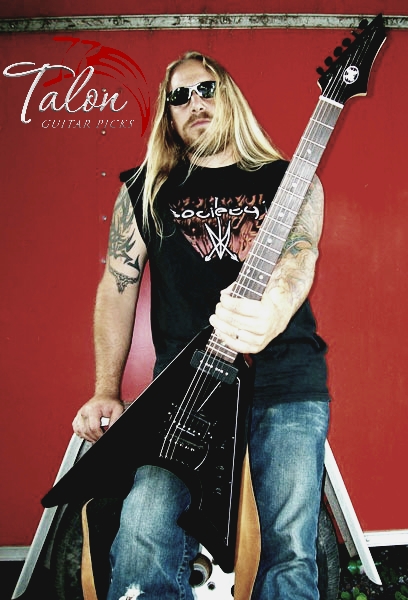 Led by former Pissing Razors (Eagle Rock / Spitfire records) guitarist Matt DiFabio, Single Bullet Theory is a sonic force to be reckoned with. Drawing inspiration from the refined vehemence of black metal to the classy flair of power metal, the Philadelphia-based (then quintet) Single Bullet Theory formed in 2000. They displayed a strong do-it-yourself attitude and work ethic from the start, touring across the entire United States four times and issuing self-released EPs in 2001 and 2002, the second of which was produced by Eddy Garcia of Pissing Razors and went on to chart at Number 4 on Metal Radio for three weeks. Their unrelenting drive helped land them the opening slot for the entire month-long Hypocrisy, Soilwork, Killswitch Engage U.S. tour in the spring of 2002. Single Bullet Theory was finally able to ink a deal with Crash Music Inc. (formerly Pavement Records) in 2003. It was at this time that the band went from a 5-piece to a 4-piece, with guitarist Matt DiFabio taking over as lead vocalist while also remaining one of the band’s guitarists and main songwriter. The band entered the studio to record their debut album, Route 666 (mixed by James Murphy of Testament, Death and Obituary fame), which was released in April of that year . Route 666 has been described as “an unforgiving example of sensory assault.” The band filmed their debut music video for the song “Murder Machines” (filmed and produced by Brett Worley), which aired on MTV2’s Headbanger’s Ball and Fuse TV’s Uranium later that year. SBT toured extensively in support of Route 666 including a month long run with the metal band King Diamond and Entombed in the fall of 2003.

Their second release, Behind Eyes of Hatred (2004) showcases the group’s expanding ability to write powerful rhythms with dynamic grooves while furthering their melodic, structured approach to songwriting. The album featured guest performances by Matt Thompson (King Diamond) and James Murphy (Death, Testament, Obituary). In support of Behind Eyes of Hatred the band ventured across the USA and Canada with Amorphis, Into Eternity and Beyond the Embrace in March of 2005 and also released its second music video for the song “Hollowed Out” (filmed and produced by Jay Bones).

After a series of lineup changes, a brief period of record label negotiations, and spending nearly two years writing material for what would become their third album; On Broken Wings was finally completed in 2007. SBT was able to reestablish its relationship with Crash Music Inc. and released On Broken Wings in the fall of 2007. Mixed by longtime friend Eddy Garcia (ex- Ministry, Pissing Razors), On Broken Wings “showcases the bands ability to capture raw, explosive riffing mixed with subtly placed clean passages and incredibly dynamic vocals. The hooks are strong and the aggressiveness is even stronger.” The band continued pounding the local and regional club circuit, playing shows throughout 2007 and 2008. However, in the spring of 2008 due to various internal and external struggles, founding member Matt DiFabio decided to call it quits and put SBT to rest. DiFabio and bassist Bill Mez continued pursuing other projects together, but towards the end of that year, Mez quit the music business to focus on his personal life.

After a three year hiatus, Matt DiFabio decided to piece Single Bullet Theory back together. During the downtime, DiFabio had written songs for what would become the band’s fourth full length album, aptly titled IV, which was released in 2011 on the newly emerged Goomba Music. With a new sound and a new line up, founding member Matt DiFabio dug deep to write the most layered and textured record of his career. Songs like “Diabolical” showed an extremely aggressive side of the band while tracks like “What Have I” were well qualified to be in any fans of Judas Priest playlist. “The Auctioneer” is a blistering ten minute instrumental featuring 18 guest guitar solos from 14 well-known metal guitarists. IV proved to be a great up-lifter for the band, and after a seven year hiatus from national touring SBT went on to support a three week tour with Canadian extreme progressive metal band Into Eternity in the summer of 2012. The band also shot and released a music video in late 2011 for the song “Diabolical” (filmed and produced by Jay Bones). In 2012 SBT continued to perform live before hitting the studio to record the song “Edge of Broken”, which would become one of five previously unreleased songs on their upcoming self-titled compilation album. The band filmed their fourth video for “Edge of Broken” in 2012 (filmed and produced by Matt DiFabio).

In 2014 amidst the writing and recording process for SBT’s next full-length album, founder Matt DiFabio spent time compiling a variety of tracks for a self-titled compilation album. The album features previously unreleased, remixed, and/or remastered songs, and ends with a previously recorded but never released cover of the song “Spirit Crusher” by the legendary death metal band Death. The album also features a link to the band’s hidden website page which contains a thirty-seven minute video with track by track commentary by DiFabio and (then ex-) bassist Bill Mez reminiscing on the band’s fourteen year history. SBT supported its release by touring for three weeks in the fall of 2014 through the Midwest and Texas.

SBT began writing for their newest album Divine Ways of Chaos in 2013, working under a non-pressured, steady pace and recording the album throughout 2014 at DiFabio’s studio Hard Attack Audio. Divine Ways of Chaos is comprised of 11 songs of pure metal mastery laced with soaring guitar solos, hook-laden choruses, and some ofthe most brutal grooves we have heard since A Vulgar Display of Power. Single Bullet Theory have created a complete metal masterpiece with the most epic feel a metal band can achieve in a single recording, while still retaining the piss and vinegar that SBT has been known to deliver. From the hypnotic melodies of “Last Train Out” or “The Arena” to the pure sonic brutality of thrasher “Fire From the Sky”, the band is poised and ready to dethrone the current kings and enforce a new regime in what is considered “real metal”. The title track “Divine Ways of Chaos” is filled with some of the best guitar craftsmanship the world has heard since “Hangar 18” while tracks like “Damnation” and “Bleeding for You” lyrically represent a dark side of the human psyche that is rarely touched by today’s modern metal acts.

2016 marked the return of longtime bassist Bill Mez. The band continued performing local and regional shows throughout 2016, and is currently establishing a marketing plan for the release of Divine Ways of Chaos, scheduled for July 2017.